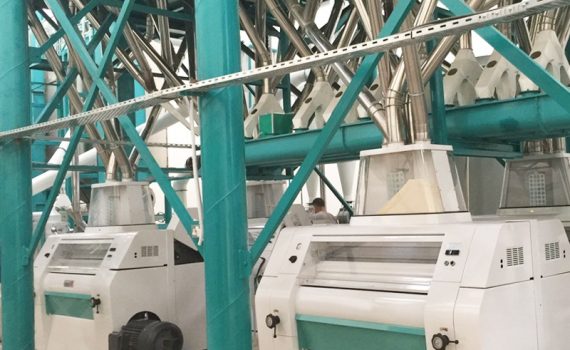 In the process of grain milling and food processing technology development, with the development of drum milling equipment, for centuries, mankind has been trying to make flour and rice more refined in pursuit of grain food. Fine white flour produced by the food has a good texture, taste, flavor and appearance, but also caused a lot of dietary fiber, vitamins, mineral elements and other nutrients loss. With the increasing incidence of obesity and overweight in developed and developing countries, the incidence of diseases associated with obesity and overweight is also increasing, and chronic diseases such as cardiovascular disease have become a society that affects health and wellness around the world problem. Grain as the most basic dietary source of human beings, plays a pivotal role in human health. Scientific and rational grain processing and consumption has aroused the concern of the community. In recent years, the cereal fortification enhancement project has tried to add some nutrients such as B vitamins and iron to compensate for some of the nutrients that are lost during the finishing process. However, this nutrient-fortified product still does not have all the nutritional ingredients of whole grains.

Since the 1980s, the developed countries have done a lot of research on the nutritional value of whole grains. Recent studies have shown that the whole valley in addition to dietary fiber, but also includes antioxidant ingredients and other physiologically active substances, these physiologically active substances may be through a single component or mutual combination or synergies to produce a variety of health effects. Most of the nutritional components of the “whole grain nutrition package” synergies more than individual nutrients more conducive to human health. According to the US Grain Board, the health effects of whole grains include a 30% to 36% reduction in stroke risk, a 21% to 30% reduction in type 2 diabetes, a 25% to 28% reduction in heart disease risk, and a favorable weight control. The results of these studies are based primarily on large epidemiological and group studies in the United States and Northern Europe. A study in the United States showed that obese adults who consumed whole grains had a significantly lower proportion of C-reactive protein (CRP) and abdominal fat than edible finishing cereals. On the basis of a summary of these large research reports, the governments of the United States, Britain, Sweden and other developed countries have issued a number of health claims about the whole grain. Europe and the United States developed the whole grain consumption is showing a rapid development momentum. Next, we look at the Development Trend of Whole Cereal Food Research in the World.

Since the 1980s, the whole grain food nutrition, Health and its processing has gradually attracted the academic circles, industry and government of developed countries, especially in the past 10 to 15 years, the developed countries to the whole Grain interest has become particularly prominent.

The first international ceremonial event was held in 1993 by the US Department of Agriculture, General Mills and the American Meal Association. After each year on the whole theme of the whole grain held annual meeting. With the deepening of research, the importance of the health of whole grains has been paid more and more attention, and different organizations have launched more and more international ceremonies related to whole grains to further promote the research and interest of whole grains. The first European cereal meeting was held in Paris in 1997. The International Conference on Whole Cereals and Health was held in Finland in 2001 to comprehensively discuss the whole grain and health science; and then in the United States of America in Minnesota and California, Healthy international conference. In 2002 the United States established the Whole grain council (WGC) in Boston. In 2007, Kansas established a “win” full grain international network organization, currently with the United States, Denmark, Germany, Canada, Australia and Japan to participate. From 2005 to 2010, the EU launched a comprehensive project on “healthy cereals”, which aims to increase the overall food consumption of Europeans to reduce the risk of chronic diseases such as diabetes and improve living standards. The project set up a technical and nutrition team of experts to conduct research to determine the quality of healthy cereal food standards, research and development of dietary fiber, oligosaccharides, phytochemicals of the health promotion of grain components corresponding to the current technology Has 43 research and development cooperation units from 15 European countries, and an industrial platform with 40 companies. In addition, Australia has established a food and food cooperation research center, the academic community, government, industry to form a joint cooperation platform to study the development of healthy, consumer-friendly food food.

The current grain mill and traditional food processing technology has undergone about 100 years of development. A key factor in the development of whole grain food is how to apply modern technology for modern food processing to overcome the shortcomings of the current processing methods. Excellent taste and flavor, but also has the role of nutrition and nutrition whole grain food. In a complete whole grain chain, from the selection of raw materials, breeding, to the food harvest, storage, milling, processing and other sectors, we should gradually shift the focus to the role of food health care up. First of all, a key issue is the need to study the mechanism of whole grains and health, the majority of the evidence is mainly derived from epidemiological studies, and this study is mainly through the dietary survey to carry out. The second is to improve the quality of food for whole grains. From the perspective of cereal science and technology, at least the following aspects will be the need for continuous exploration in the future for a long time, such as the identification, characterization and bioavailability of bioactive components in whole grains; the whole grain structure Sensory characteristics and nutritional characteristics of the whole; whole grain food processing and preservation of new technology research that you; emerging market-friendly whole grain food research and development; whole grain food production research and control. Here are some measures to promote the whole grain food abroad for reference.

The first one: American

The United States Food and Drug Administration (FDA), which was signed in 1999, said that a diet rich in whole grains and other plant foods and low total fat, saturated fat and cholesterol could reduce the risk of heart disease and some cancers. According to the American Guide and the Food Pyramid, it is clear that half of the cereal food consumed every day should be whole grain and should eat at least 3 servings of whole grain food per day to reduce cardiovascular and cerebrovascular diseases, type 2 diabetes and help with weight control The American Heart Association, American Diabetes Association and American Cancer Society are also particularly recommended to increase the consumption of whole grains.

What kind of standard can be marked as whole grain food? This is a controversial topic. At present, the US FDA’s definition is that the total weight of the product 51% and above for the whole grain products can be marked as whole grain food. As long as the product meets this condition, it can be shown on the product: “rich in whole grains, low total fat, low saturated fat and cholesterol, can reduce the risk of heart disease and some cancer.” Because there is no laboratory test method for total cereal content, the FDA requires that the content of dietary fiber equivalent to or above wheat be the criterion. Brown rice, although the fiber content is not high wheat, but 100% of the whole grain food. In order to make it easy for consumers to identify whole grains, the US Grain Board has approved the use of a full grain mark, and many food manufacturers are their members, and this full grain logo clearly shows the total grain per serving.

The second one: England

The Joint Health Claims Program (JHCI) in 2002 published an authoritative document on whole grain food, namely: “A person with a healthy heart tends to eat more whole grain food as part of a healthy lifestyle.” , This health claim must also meet the six conditions set by the JHCI Expert Committee. In January 2008 British Bakels, a UK-based large ingredient supplier, was granted the full grain product logo of the US Full Grain Commission, and as long as the product contains at least half (8g) of whole grains, it can be labeled with full grain to promote the whole of the UK Food consumption.

The last one: Sweden

In 2003, Sweden approved a health claim on whole grains: “A healthy lifestyle and a balanced diet rich in whole grains can reduce the risk of coronary heart disease, and product (X) is a food rich in whole grains [ Contains the total grain content of (Y)%. “The percentage of total cereal content must be at least 50% of the total dry basis of the food, and there are strict limits on fat, sugar and salt content. According to the US Cereal Board’s information, the consumption of whole grain food is in the stage of rapid development. New product development of whole grain food has grown dramatically since 2000. According to Mintel’s new global product database, new products for whole grains in the world increased by 15 times compared to 2000, and as of March 31, 2008, there were about 2368 full-grain products entering the market in 2007 , While in 2000 only 164 species, an increase of 1344% (see Table 1, slightly). In recent years, the fastest growing demand for whole grain food is the United States, which is largely due to the successful action of the American Grain Board.

2—Status of Whole Cereal Food Consumption at Home and Abroad

At present, China in the whole grain research also began to pay attention, but it is not enough. The consumption of large grains still remain in the pursuit of fine white flour, rice, good taste and flavor. Although a small number of enterprises in the research and development to promote the germination of brown rice, whole wheat flour, stone powder, etc., but in general China’s whole grain food research and development is lagging behind, the lack of healthy grain consumption guide, the whole grain products on the market, sales, Specification for cereal food. The development prospects and trends of whole grain food.

According to the International Food Information Committee consumer’s attitude towards health food research results, consumers are most concerned about the six health food or ingredients in the whole grain and dietary fiber accounted for two, and 71% of Americans want to eat more Whole grain. The United States and Europe have established cooperative research platforms composed of academia, industry, government, education department, farmers, health organizations and so on. Therefore, it is foreseeable that whole grain food will be more widely concerned in the world, its market will also be rapid development, which undoubtedly on our diet and food consumption concept, until human  health have a profound impact. Or click www.maizewheatmill.org for more details and prices about flour mill machine.